It's hard to conceive that 51 years have passed since Smarty, Toughy and Mouse searched the docklands for a boat. As luck would have it, they eventually found one captained by a flamboyant character who came to be known as The Elderly Boy.

Now I have more than a passing interest in seafaring. I have always been fascinated with boats. When watching the TV episode where the boys board the boat for the first time, I always found myself admiring this lovely craft with the wooden deck-house and brass fittings. A lifeboat you say? 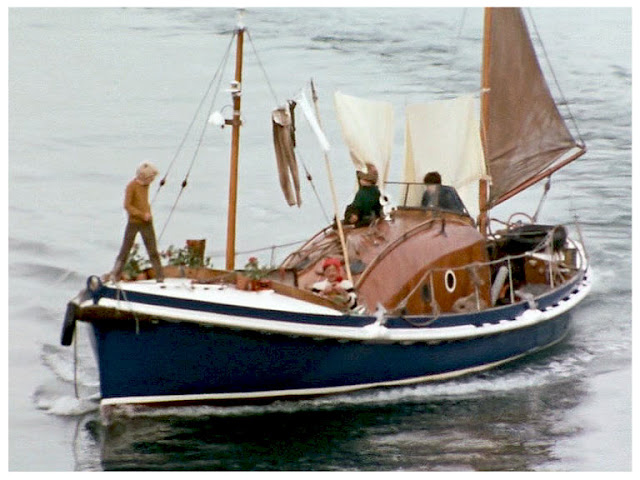 During the many lock-downs of 2021, I found time to revisit the TV series again. I had asked my friend Uli to mention the lifeboat to Joy Whitby, should he write to her again. I thought it might be very interesting to discover the name. The news soon came back that unfortunately Joy could not recall the name of the boat. Furthermore, with the passage of time, those who might have recorded it in some written form for posterity are no longer with us.

Happily Joy was able to tell us that the boat was hired from Milford Haven. At that time she was in private ownership and no longer a working lifeboat.  Joy could tell us that after some negotiations it was possible to hire the vessel for a number of days shooting. Can you imagine how much fun that must have been? Certainly for Smarty, Toughy and Mouse! Bright and sunny days floating around the waterways of Milford Haven. With Charles Hawtrey no less! Surely a childhood memory supreme!

But now we have a mystery. Nobody living knows the name of the boat. What was her life like before TV stardom? What became of her since? Does anyone care? Well, to the latter question I say yes! There was only one thing for it. I would begin an investigation. I was determined to discover the identity of this mystery lifeboat.

Where to begin? The obvious starting point seemed to be the TV series and the many frames within which the bow of the lifeboat is visible. Surely a name would be obvious? Lifeboats have names, and they are generally painted upon the prow. But no, after pouring over the footage, frame capturing and enhancing specific frames - no trace of a written name could be seen. No wonder Joy couldn't recall any name, for  there was no name painted upon the boat! Now what?

I decided to begin researching historic UK lifeboats. Particularly those which might have been located in Pembrokeshire and surrounds in the years prior to 1970. Happily, there were some good records available in the public domain. I was able to determine with the help of Paula at National Historic Ships UK that our mystery vessel was a Liverpool class lifeboat. The first of which was constructed in 1931 and the last one completed in the mid 1950s.

I was then able to ascertain that early Liverpool class boats were single screw - meaning single propeller. The later boats were twin screw - two propellers. Based on some visual attributes, I could confidently deduce that our mystery lifeboat was twin screw. Ruling out boats known to be single screw craft,  I could narrow the field to around 30 boats. And from that list, I could discount all boats which were still in RNLI service in 1970. I was looking for a retired boat in private ownership. Now it was time to narrow the field further. I put together a dossier in electronic form, outlining the mission, and including as many screen capture images of our mystery lifeboat as I could. Inside I included a graphical representation of the deckhouse to aid in identifying any known historic lifeboat (excerpt below).

From various online images, I could see that our mystery lifeboat had some specific fixtures and fittings that set her apart from others in the deckhouse area. There were one or two possible matches online, but not enough detail in the photos to make a positive identification. There must be other photographic archives in private hands, I gambled.

I made contact with Hayley Whiting - the Heritage Archive and Research Manager at RNLI. Hayley was very helpful, even forwarding my dossier to the Lifeboat Enthusiasts' group and the Historic Lifeboats group.

After only 7 days I received an answer from Hayley:

Thanks for the additional information. I've taken a look and shared with our Lifeboat Enthusiasts' group and the historic lifeboats group.

Between us we feel that the boat is most likely the ex Ilfracombe boat Robert and Phemia Brown. She went to Milford Haven in 1966 after being sold to an organisation doing marine work. She left Ilfracombe on the 10th of July 1966 and went to Padstow for disposal and subsequently to Milford. She was last seen at Weymouth as a fishing boat in 1971 but here whereabouts since then are unknown.

I really hope this information is helpful. If you're interested, I could ask for a piece to go in the Lifeboat Enthusiasts newsletter to see if anyone has anything further that might help?

And so my friends we have our answer! The mystery lifeboat that ferried the boys to Grasshopper Island was once ON 904 Robert & Phemia Brown. Undoubtedly she saved many lives at sea before her greatest mission - a search for an uninhabited island. Here are some heritage photos of her kindly provided by Hayley at RNLI, taken between 1952 and 1966 while she was still in service at Ilfracombe.

I believe that further information was requested within the Lifeboat Enthusiasts newsletter, in the hope that we may discover her ultimate fate. As with many of these ex lifeboats, she may indeed have had a life as a fishing vessel. But I think she is best remembered - at least upon this forum - as the beautiful ship that took Smarty, Toughy and Mouse on a great adventure way back in 1970. With her shining wooden deckhouse, giant white ships wheel and brass fittings - a better boat could surely not have been found. With a line of washing hung between her masts and boxes of geraniums on her prow - we eagerly watched as the adventure began. Thank you boys! And thank you Joy! 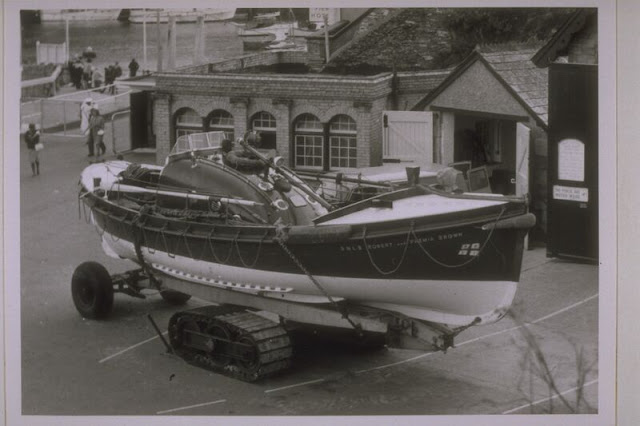 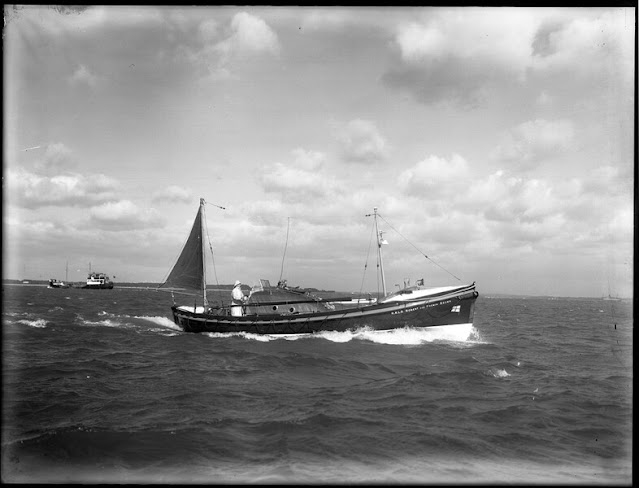 Popular posts from this blog

2021 marks the 50th anniversary of Grasshopper Island! It was this grand milestone that led us to put together our brand new little blog - Grasshopper Island News .  It seems appropriate to mark the occasion and remember fondly the adventures of Smarty, Toughy and Mouse. We hope our blog will bring back happy memories for 'elderly boys' and girls wherever you may be. And moreover, we hope our blog can introduce curious new potential fans to this wonderful tale. The blog has been created by Uli and Chris after we realised that we shared a great fondness for the show, and indeed for times long since passed. And we think Grasshopper Island is deserving of a digital home on the internet. We hope that you will join us in celebrating the occasion and follow our blog, where over time we will share some wonderful - never seen publicly before -  facts, tidbits, photos and footage from the production all those years ago! We are honoured and fortunate indeed to have the supp
Read more

Well it's that time of year again. School has finished and kids everywhere dream of fun in the sun with perhaps a trip to a faraway beach for a dip in the sea. Just like Smarty, Toughy and Mouse did all those years ago. With travel still restricted for most of us, we thought it might be fun to take a look at some of the sunny and sandy locations that our trio of adventurers found themselves back in 1970 !  School's out for Summer! Part of the fun of researching Grasshopper Island is discovering some of the little known facts relating to the TV series and the book that accompanied it. One of my favourite scenes is from Episode 2 "The Elderly Boy", when after some time at sea, our bewildered sailors arrive at "an uninhabited island" for the first time. There they are shown climbing great golden sand dunes. There is nothing quite like that feeling as a boy of  spying a giant sand mountain and realising that it is there to be conquered ! Even if with hindsight
Read more

Chris and Uli
Hi we are Chris from Ireland and Uli from Germany. We love Joy Whitby's creation Grasshopper Island!